Taking actions is one of the most important aspects of MLP:CCG. That’s how players interact with the game (and thus each other). But what exactly is an action? When you can take an action? “Well, that’s easy”, some may say, “If a card has Immediate on it I can use it any time, and if it has Main Phase I can only use it during my Main Phase”. And that is actually a good enough answer most of the time. But sometimes things are more nuanced than that. For example, did you know that sometimes you can’t take Main Phase actions during your Main Phase? I certainly didn’t at some point!

Today we’re answering the question: which actions you can take when.

What is an action?

First, let’s actually figure out what an action is. Action is one of the following things:

That’s it! That’s all the actions you can take in the game. Of course there’s more to it than that, but that’s a rough overview.

If a player chooses to take an action, they fully resolve it and then pass the priority to their opponent.

So simply speaking, when you have the priority you can do something or pass. After you did something it fully resolves, then your opponent gets to do something.

Let’s look into more detail how priority windows work. As an example we will take a priority window that opens before a player draws a card at the start of their turn. Player A will the turn player and Player B will be their opponent.

A priority window is opened at the start and end of each step and each phase or in-between each item on the list above, but with some exceptions:

Here’s a very helpful turn structure chart with all the priority windows in it:

To recap: during a turn, there are priority windows during which players receive priority to take actions.

Priority by itself isn’t very interesting. While it does define when you can take an action, it doesn’t define which actions you can take. This is when timing rules come into play. Many cards have so-called “Timing phrases” that specify when you can play that card or activate that ability. On cards you can find timing phrases emboldened followed by “:“. Here’s a list of all of them:

In addition to timing phrases on cards, there are also additional Main Phase actions defined by the rules:

Notice that you can only play Friends and Resources (and Troublemakers) as a Main Phase action (unless they’re Hasty of course).

Immediate is the simplest one. You can take an Immediate action whenever you have the priority. As simple as it gets!

In fact, ever since Equestrian Oddyseys Faceoff and Reaction have been completely replaced by Immediate. You can even see text like “Immediate: During a faceoff …” on newer cards, like Sunset Shimmer, Clever Calculator 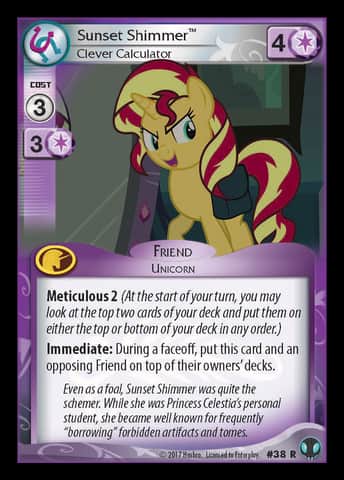 Faceoff is just like Immediate, except you can take a Faceoff action only during a faceoff. Some Faceoff timing phrases are prepended with an additional constraint of which type of a faceoff they can be taken in, e.g. Troublemaker Faceoff.

Now Reaction is a little bit more interesting. Just like Immediate or Faceoff you can only take Reaction actions (that’s a fun thing to say) whenever you have the priority. Similarly to Faceoff a Reaction timing phrase might be prepended with an additional constraint, e.g. Faceoff Reaction.

However, unlike Faceoff and Immediate all of the Reaction abilities/cards have also a condition written in their text. If the condition was met since the last time a priority window was closed, you can take a Reaction action, but no more than the same action once.

So as we learned previously at the start of any phase a priority window opens and the turn player receives the priority. Let’s imagine this situation: you have Eagle, Soaring Raptor

at home with 3 cards beneath it, your opponent moves to Score Phase and you want to move your Eagle. When the phase starts a priority window opens and now your opponent has the priority. After they do something or pass it, you receive the priority. Now let’s check if we can use Eagle’s Reaction condition is met (“at the start of any phase <…>“). Last time a priority window was closed was in Main Phase and now you’re in Score Phase. So since then the Score Phase has started thus Eagle’s condition is met and you can take that action. Once you do that you won’t be able to use that action again until the condition was met again.

Important to note that you can take multiple different Reaction actions for the same condition. So if you have 2 Eagle, Soaring Raptor

in play instead of one, you can activate both of them (one at a time).

Now this is when it gets interesting. Unlike all other timing phrases, * Phase actions are not and can’t be taken when you have the priority!

Why is this important? Let take a look at an example. Player A has Method Mares, Convincing Act

in play. Their opponent, Player B, has Berry Punch & Orange Swirl, Drinking Buddies 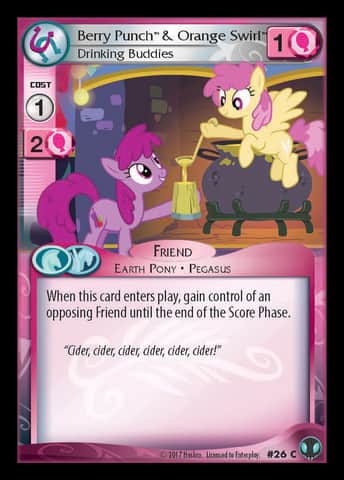 And one more example just in case. Player B has Pile of Presents 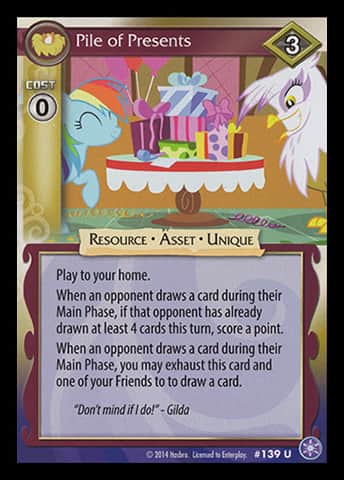 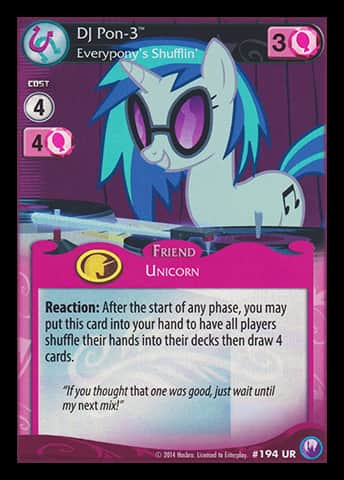 in play and they are at 9 points. It is start of Player’s A Main Phase.

Note: This is no different for Main Phase actions like moving, rallying, etc.

That’s pretty much everything you need to know about which actions you can take when. Let’s recap:

I hope this post has been helpful to you and maybe you even learned something new!