Last time we talked about taking actions. That post goes into details of which actions you can take when, however, there’s a bit more to taking actions than just knowing when you can do it. It is also important to know how to take an action and what happens when you do.

So this time we will fill that gap, and likely will open a whole lot of new gaps in the process.

Let’s refresh on the set actions that players can take in the game:

Even though those sound very different, the steps you need to do to perform them are the same, with some very slight differences. But first, let’s talk about costs.

In MLP:CCG actions and effects can have a cost. You can’t take an action or process an effect if you can’t pay all of the costs. Costs appear in many different forms, so we’ll review each one.

While Troublemakers don’t have any printed cost, the cost to play them is .

If a part of the action tells you to pay something, that something is a cost. Not all of the cards with word “pay” on them imply a cost, only cards that specifically instruct you to pay do.

Here are some examples:

If part of the text has “do X to do Y”, X is a cost. For example, exhausting and discarding a card in Apple Bloom, Re-Markable 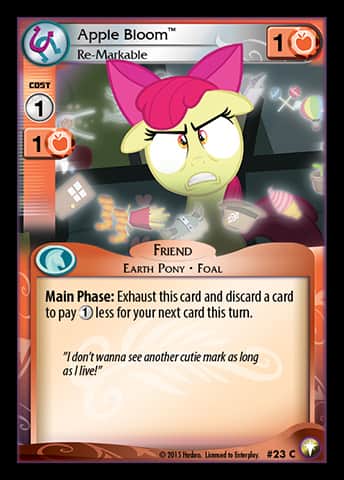 ’s ability is a cost. Retiring friend with Minuette, Schadenfreude 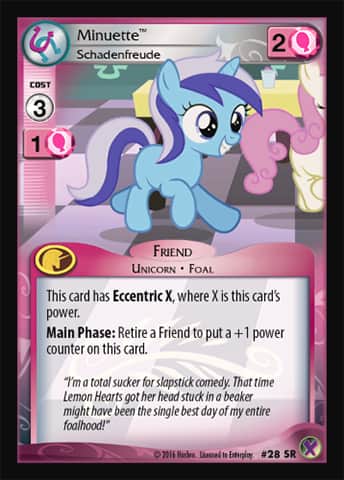 is a cost. Very important to note here that if you have a card that has “do X to do Y” in its text, that’s not a cost for playing that card, it’s the cost of processing it’s effect. For example, in Belly Flop

retiring a friend is not a cost for playing it. We will touch more on that very shortly.

Main Phase actions have intrinsic costs. Pay to move, pay to draw a card, pay to play a Troublemaker, etc.

Now that we know what costs look like, let’s see what does it actually mean for something to be a cost.

You can’t pay a cost that can’t happen

This one is pretty straightforward. You can’t pay with something that don’t have or can’t do. You can’t exhaust Princess Luna, Midnight 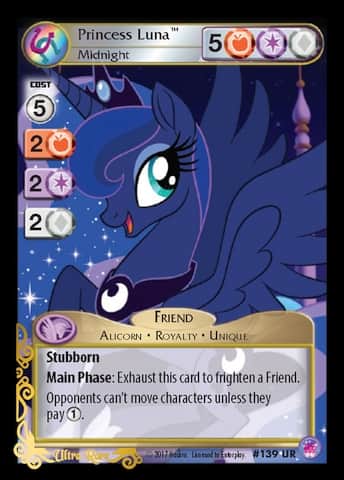 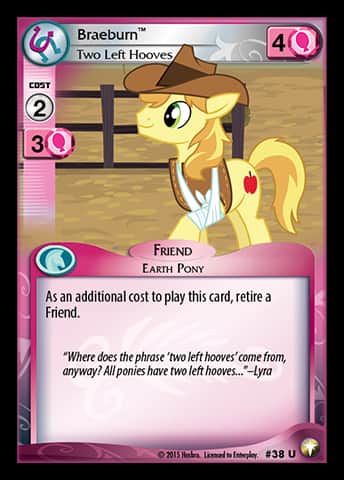 at all if you played Bats! 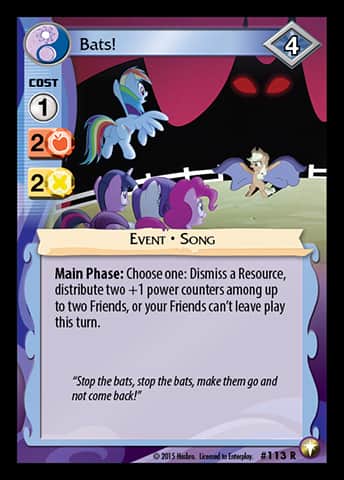 Costs that are replaced can’t be paid

This one is actually fairly important and I’ve seen some players not being aware about this little thing about costs. If any relpacement modifier (“if X would happen do Y instead”) replaces the cost that you’re paying, you can’t pay that cost. Let’s dive straight into examples:

If there are multiple costs, you have to pay them in order that allows to pay all of them

The title here is self-explanatory, but let’s still look at an example: if you have a Friend with an ability that has cost “Exhaust this card and retire a Friend” and that’s the only Friend in play, you have to exhaust it first and then retire it. Pretty straight-forward!

If an effect has more than one cost, you have to pay for it all. Let’s take a look at Apple Bloom, Re-Markable

. You have to both exhaust her and discard a card to pay the cost for that ability. You can’t just do one of them and call it a day.

Costs on actions and costs on effects

Let’s look at Bale Out! 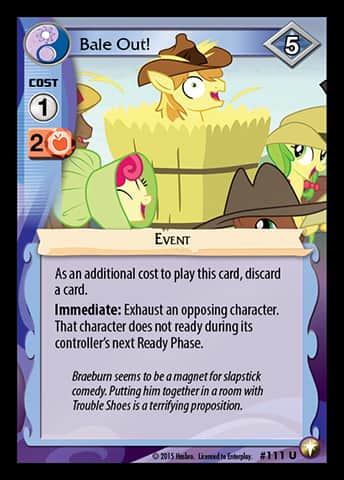 . In the first one, discarding a card is a cost for playing that card. So if you for some reason can’t discard a card (e. g. you have no cards in hand), you can’t play Bale Out!

. However that is not the case with Belly Flop

. While it does have a cost of retiring a Friend that is a cost on its effect. You can still play the card just fine if you have no Friends on the board (or played Bats!

, but after you start processing its effect, if you can’t pay the cost nothing will happen.

And don’t let the similarity fool you, costs on activated abilities are costs to activate that ability, not to process its effect. So while Minuette, Schadenfreude

’s, you can’t activate it if you can’t pay the cost. It’s not like you activate and it just doesn’t do anything (like with Belly Flop

). To be fair, I couldn’t come up with an example where this difference actually matters, but who knows what cards we might get in the future, so I thought it’s better to not skip this bit.

Costs for playing Events and copying

There’s one last thing that is noteworthy about costs. When you copy an Event, you don’t pay costs for playing it again (because you don’t play it, you copy it). That means if you copy Bale Out!

, you won’t have to discard a card. However, if you copy Belly Flop

, you still have to retire a Friend, because retiring a Friend as a cost is part of Belly Flop

Another thing, that some cards have text that is referring to the cost, like Party Hard 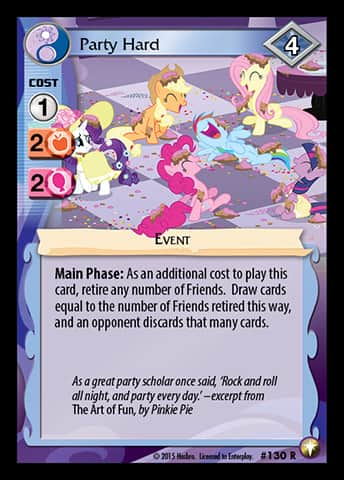 . So when you copy it nothing will happen (in Party Hard

’s particular example), because you didn’t retire any Friends since you didn’t have to pay that cost.

Now that’s pretty much everything one need to know about costs. Let’s now get to taking actions!

Steps to taking an action

Taking an action is done by doing steps in a specific order. If any of those steps can’t be complete for any reason, the game state is rewound right to the moment before the first step. And, yes, I’m basically rewriting everything that is written under rule 705.2 here with some notes.

After you’ve decided to take an action, the first thing you do is that you announce the action you’re going to take (playing a card, performing a Main Phase action or activating an ability). If you’re playing a card, you also have to show it.

Step 2. Determine the costs and check the color requirements

Color requirement part is fairly straight-forward and should be familiar for the most of the players, there’s nothing particularly interesting about it. 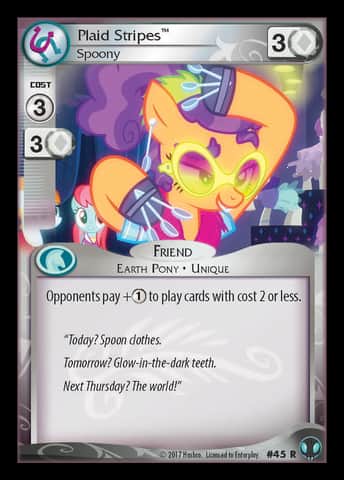 This is where you pay said costs. Whether it’s giving away some of your action tokens, or discarding a card. Note if you for any reason can’t pay all of the costs at this step (for example, one of the costs is replaced), you can’t complete this step, thus the game is rewound to right back before Step 1.

Step 4. Put the card into the Queue Zone

I don’t know how many people are aware, but we actually have a Queue Zone in the game! Funnily enough, there’s no actual queue involved because I’m fairly sure it’s impossible to have more than one card in the Queue Zone at the moment. So when the action you take is playing a card, you put that card into the Queue Zone on this step. Otherwise, skip this step. 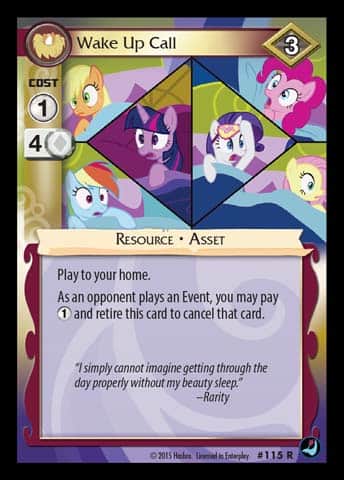 ) immediately resolve right away here. Important to note that this happens before the card’s text is actually processed, which means that if your opponent has a Wake Up Call 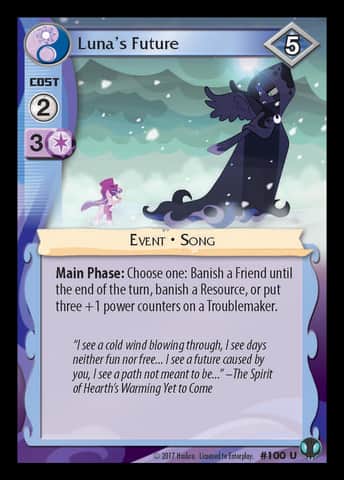 , you don’t have to name which mode you’re choosing (or any decisions about the card whatsoever). That is done on the next step, and “As” abilities process before that.

This is where the magic happens! The action you’re taking comes to life. You read the text and do what it says!

If for some reason following some of the instructions can’t really be done, the game is not rewound, instead you try to follow as many instructions as you can.

After you follow the instructions, some of the following things happen:

But this list doesn’t really show a full picture of what will happen. For instance, what does it mean for a Friend/Troublemaker/Resource to enter play? What happens when you process a Main Phase action like moving? Let’s take a look at both of them in more detail.

So after you’ve played a Friend/Resource/Troublemaker it enters play. Entering play means being put from another zone into the Play Zone, also known as “put into play”.

When that happens following things happen in order:

Aaaand that’s it! After that, your card is officially in play! Note that the same rules apply for cards entering play for reasons other than you taking actions, like putting a token Friend into play, or putting a Friend back after using Interdimensional Portal 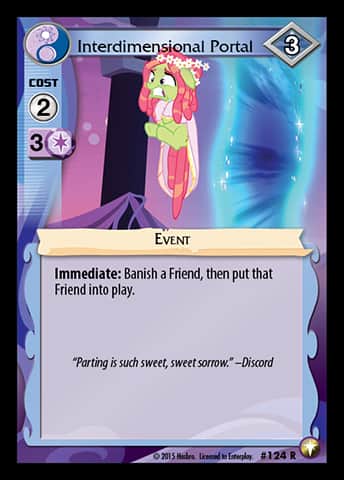 on it. This is also why using Portal on Friends with “When you play this card” abilities doesn’t work, because those abilities trigger when you actually play a card (which you can see in Step 5 of taking an action above).

As you probably know Play Zone is split into areas. Both players have a Home area and each of the Problems in play have their own area.

Every card in Play Zone is in one of the areas. No card can be “nowhere” and no card can be in two areas at the same time. Moving is when a card goes from one area to another.

Just like entering play, to move a card you need to follow some steps in order, and they’re actually kind of similar to the “entering play” ones.

And that’s it! The card has successfully moved.

That’s pretty much everything you need to know on how to take an action and what might happen when you do! I tried to not go too much in detail on modifiers, because they’re a very big topic on their own and go way outside of the scope of this post.

Hope you learned something new!